Summary of Bug: Double Story boss spawn in the end of IA.

What you were doing at the time: Entering the bossroom at the end of IA after using a Key of the Winds.

Where you were in the game/menus: Past the Team Agony boss, past the Key door on the map after

What happened: Entering the bossroom normally prompts you with the Yes/No question to enter for Suicune’s boss fight. Sadly i slided across the tile that prompts you, got the yes/no question, but it seems behind the tile for the question, you directly enter the map, So i slided straight into the next room due to the client not stopping.

So you get to the new map and have to still do yes/no as i cant move elsewise. did yes, map re-loaded. and the Suicune story loads, the fight starts. and the story loads once more (While under attack…) and made Suicune spawn TWICE. which is a big problem there.

Actual Result: Story triggered twice due to slide-entering the map due to client not stopping to move after a yes/no dialogue popped up. 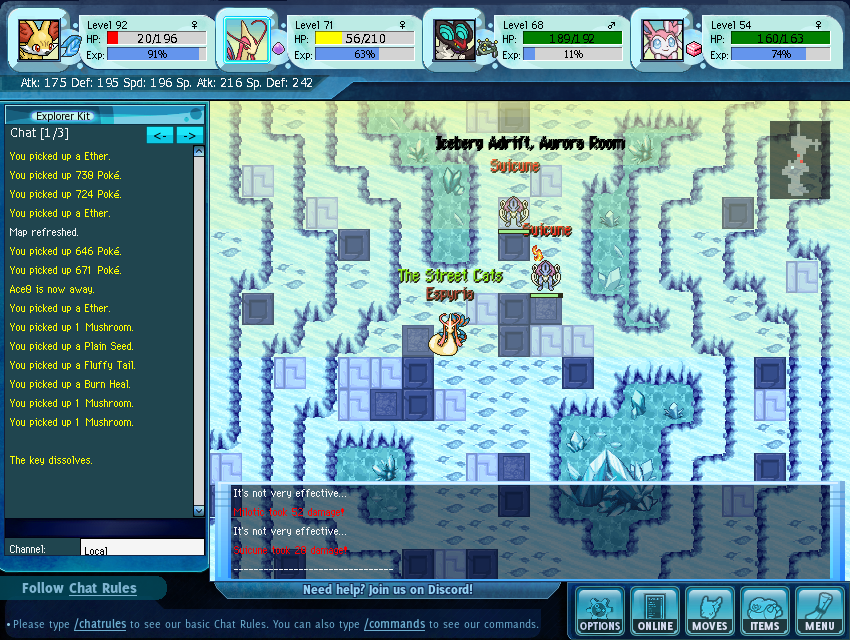 After inevitably using all my revs as i cant handle two at the same time, my menu still had a ‘Revive’ option when i had no revives left, and no Escape option when i did have a Escape rope on me, when pressing the Revive option. it only showed cancel. which then returned the Escape option which i did not trust as there have been occasions of people losing items due to glitchy escapes.

Had Slayer help revive me and manually escaped. to prevent any oddities there.

Should a video be needed let me know, but i’ll need the assistance of a staff member warping me back to the map before everytime to try reproduce it, as its a bit tedious to do a 1 hour + run for one attempt of a recording. ^^

Thank you for the detailed report! We’ll look into this

A suggestion i do want to leave though on preventing this problem here, Is to maybe remove the map transition behind the yes/no dialogue, as saying yes warps you to the map regardless.

This limits you only beeing able to enter in one way. by saying yes x3

ummmm is the server off tonight???