So, after the big update which included both separated animations and shinies, I’ve been working on Lilligant, my favourite Pokemon.
We all know that before the update, the attack and movement animation were shared, and now it has a freeze attack animation, so here I propose Lilligant, keeping the Sleeping and Idle animation, but changing the Attack and giving it a Special Attack one on which it spins, since it’s ‘‘characteristic’’ move is Petal Dance. Also edited a little bit the movement animation.
I also worked on the shiny one since I love it too, I hope you guys like it ;; and I would really be glad if it was implemented ingame… I’m planning to do Petilil’s Sprite Sheet as well, but this one should have :thumbs_up: for that to happen… Thanks for reading and maybe considering!
#HailLilligant 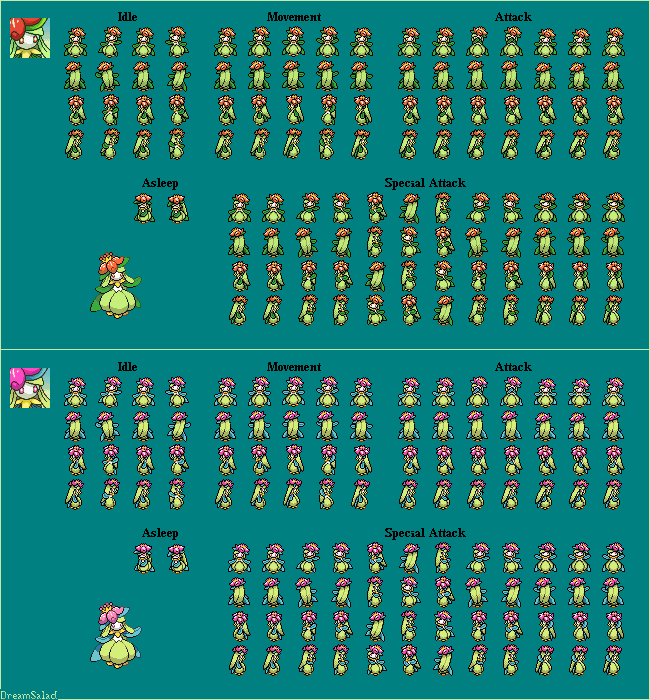 I’ve also considered on changing the Idle animation, but not really sure about it… anyways, I will leave here both (Old and suggested new one) and depending on your opinions I would replace it…
PD: New Idle animation was inspired on Pokemon Black/White sprites.
Old:

The following is the animation on how I changed a little bit the movement one:

Thanks, I would be really glad if that happens ;v;

Thanks! :D I do really put a lot of effort there ;v;

This is pretty amazing

Damn, that’s a lovely sprite & animations. You did a real good job.

Syni you are the designer now make it happen