good afternoon to all. this is griefy and some friends were telling me i should make a forum acc so here i am. ive been meaning to put this suggestion i have had floating in my head for a bit.

many players have stated a severe issue with lategame repetitiveness as well as lacking an incentive to use lv 100s as they are much less useful than lv 90s. lv 100s cannot gain exp and exp all does not work with them, so all pokemon killed using lv 100s are “wasted.” most lv 100s are boxed forever as there is no point to using them, or repeatedly doom seeded so as to bump their level down, which is not a very good solution as it is tedious and expensive. having a lv 100 should not be a chore, it should be an accomplishment.

a popular suggestion to fix this problem is to remove the level cap and continue levelling past 100. however this has been met with resistance as being over lv 100 feels “not in line” with canonical pokemon games which im inclined to agree, and does not feel like the best solution to me as it will only continue linear progression and players will continue to hit walls until the next endgame dungeon comes out. i do, however, have a potential fix for this (though im not entirely sure if its feasible code wise, however it is worth a shot anyway.) 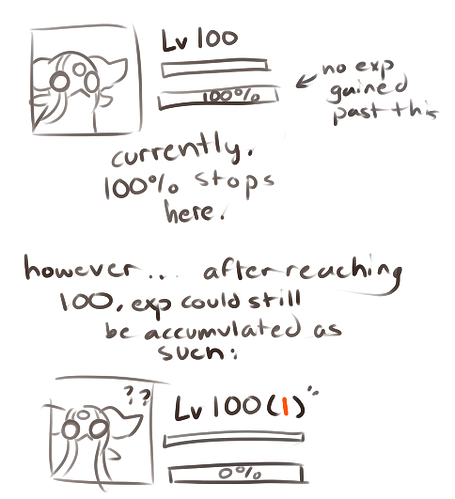 484×531 75.6 KB
once a pokemon reaches 100, a counter could begin. this counter would be theoretically infinite, as in, 999 or something. these seperate levels could count as “points” that could be redeemed for special bonuses, and all exp that would otherwise be lost would go towards this counter. these “extra” levels could be calculated in the same way the normal level formulas are calculated, so levelling further remains a challenge.
as for what these points could do, i believe a menu or an npc (which could be locked behind a rank like croagunk perhaps) could be interacted with to allocate the points to a number of bonuses, either for the pokemon itself or passive boosts to all pokemon on a user.
some of these could be:
pokemon specific-

etc, etc. these are just a few ways these theoretical points could be used.

this suggestion takes inspiration from both elsword (which sucks but has a similar mechanic) as well as pmu6 which also allocated stats based off of points one obtained via level up (by word of mouth anyway, i didnt play pmu6) and since this was already in pmu6, i feel this would be thematically appropriate to PMU, and maybe even feasibly implementable

following this, pokemon npcs in DUNGEONS would go past the effective level cap so there wouldnt be a need to have stat allocations to pokemon (which would be way too much code) and their stats are simply just bumped up by the leveling stat growth model already in place (similar to how exp would follow the same growth type past lv 100). the stats of npcs really do not matter as they are unrecruitable anyway and this would make them a challenge.

thank you for reading. feel free to respond with any input you have on this idea. i have been thinking about it for quite a while and i think it would satisfy a lot of problems with PMUs endgame and make it easier for staff to create challenges in the future with the potential such a mechanic has for a metagame.

PMU 6 did have skill point distributions. You would get 3 points per level up which you could put in any stat of your choice with no limit.

But to remove the cap and continue to 1,000. No. While the stats do get crazy around level 2,048 (had an old server back in 2016 and i someone made an item glitch past the 100 cap resulting in getting way higher levels. Server’s long gone since then).

I’m already struggling as is to get one mon to 100 lol.

except i address this:

stat point allocations, 1-5 points at a time.
these could cap at perhaps 175% of a pokemons lv 100 stats and no further can be allocated after a certain threshold.

and if npc stats are additionally raised past lv 100 cap, i dont see an issue with having larger stats.

furthermore, this post is like… about people who have already reached level 100. or have reached lv 100 multiple times. i think that section of the playerbase should definitely be addressed and considered when talking about game balance as they are the majority of active players. and this suggestion does not hinder anyone looking to become lv 100 either

this sounds a lot like Diablo 3’s paragon system to me. in that game once you hit level cap you kept gaining exp. but the levels went into points tied to your account. every character you had was able to benefit from the buffs granted by allocating these points. and you could change the allocation in the menu whenever you felt like it. say you were running a tank and had everything in health regen but decide to switch to a speed character. you can just swap the points over in the menu and swap them back when you feel like playing something else. the level progression also for Diablo 3’s paragon seems like it takes a lot more exp than regular levels to get a point.

though in my mind, the reason the paragon system works so well, is that Diablo 3 is build on scaling difficulty as it’s primary feature. what I mean by this is that if you are abysmal at games like it, you can still play and finish the game. and if you are used to them you can start at a higher difficulty. but the scaling really comes into play once you start accruing paragon points, since they make all your characters stronger, and there isn’t really a limit to them except how much time you are willing to spend, Diablo 3 has to have difficulties way higher than it’s normal ones. there is easy, normal, hard, expert, master, torment, torment 2, torment 3 all the way up to torment 13 (if I remember correctly). but the difficulty scaling doesn’t end there, there are areas that you can keep scaling up to higher and higher difficulties that are discrete from the main game. this is where most of the end game and replaying players spend their time. this large variance in difficulty accommodates for the large variance in power levels you can get with a post level cap point system.

I think this is a wonderful idea and should be implemented. but I feel that around the time it comes out or a little after there should be a dungeon released that takes advantage of it. one that either scales to the player, or you can set how many extra points you want the enemies to have invested into them.

Then we will have an actual end game, without having as many bored end game players.

(also, I think the points being account wide rather than per pokemon would be better. it would feel less restrictive at least, and players could have a “score”)

I think the whole level 100s thing being less useful than 90s is a real problem that does need to be addressed. I think the idea of a psuedo-level without any stat gains is good. The stat point allocation thing sounds pretty busted even if it’d take a long time to really make a difference. A 175% increase to a stat is just insane.

I like the idea but I think it’d be best with no stat increases.

I like the idea but I think it’d be best with no stat increases.

i cant say i agree, sorry. my suggestion was actually made with this in mind- a way to make pokemon stronger without being “level 125” or something. this suggestion was made with the idea in mind that future dungeons would have pokemon with effective levels past 100 as one of the primary desires of endgame players is tougher dungeons. in order to approach this there will obviously need to be stronger pokemon unless we just want to keep adding items like dusts or something because lv 100 enemy npcs can only be so powerful. 175% was an arbitrary number i brought up as well, and if that was the case you would need to allocate points PER STAT which would take an absurd amount of time to fully cap provided the levelling formula remains for levels after 100. i understand where you are coming from, but i feel as if the other benefits are a sidenote to the flat stat increases so to me it doesnt make much sense.

(also, I think the points being account wide rather than per pokemon would be better. it would feel less restrictive at least, and players could have a “score”)

i guess thats fair, but i feel like it wouldnt make much sense to the benefits i posted for “specific pokemon only” as if you are working to level a certain pokemon, the points you gain from levelling it should really apply to that pokemon. i think some benefits would make sense to apply account wide but not others. thank you very much for your support.

Imo the best idea would be having an NPC that trades these “points” you get from levelling up past 100 for Joy seeds, which increase level by 1.
That’s just so you can use 100s for exp allying and their exp doesn’t go to waste