Why Does Surf Still Have Friendly Fire: The Movie

Instead of doing school assignments or playing other video games I’m going to get my magnifying glass to try to figure why PMU still has Surf hit allies featuring PMU discord and forums posts.

Poor goomy would still have to train all by his lonesome self. At some point in PMU, moves that usually hit allies like Discharge, Lava Plume, Earthquake, Petal Blizzard got that aspect removed, but Surf still hits allies to this day after so many years…

The change was undocumented, but at some point in March 2017 or earlier, but this was the earliest post in the forums/discord I could find about the change. Weird something this big isn’t posted somewhere.

Pokemon Mystery Super Dungeon came out in September 2015 and that was the first game where moves stopped damaging allies. Maybe one day someone picked up PMSD, thought that AoEs not hitting allies was cool, and decided to implement it on PMU.?
Who knows? Like I said before, the change is undocumented.

So to answer the question of the title, Why does Surf STILL Hit Allies?

The reason that I found that keeps getting parroted is because of abilities like water absorb and storm drain. Very and I mean VERY few pokemon have the luxury of having one of these two abilities. Let’s do the math.

Let’s be generous and say there’s 500 pokemon released in PMU. There’s about 30 fully evolved pokemon in the game that have either storm drain/water absorb/dry skin/telepathy(just throwing 2 extra abilities in there). Statistically, there’s a 6% chance that you have a party member with one of four abilities. There’s a whopping 0.0216% chance that everyone in your party has one of those abilities.

So if you ask

You legitimately have a 6% chance of having someone saying yes. That’s not taking into account dungeon preference, etc. Good game mechanic or incredibly inconvenient niche?

I don’t have Storm Drain… I have Motor Drive!!!

Surf apologists support Surf hitting allies because it encourages people to think about party building when using AoEs. However,

Other abilities benefitted from AoEs as well, so it’s not really fair to use that as an argument. If PMSD remove all AoEs that damaged allies to make the game more convenient should PMU follow the same trend with all of its moves? Should PMU go old school and follow what the original PMD games did?

That’s a question for the staff members in this game and whether or not they want to make it a group discussion with the players or not.

I’m bias because I want to train a Goliospod in Infernal Volcano with people and its only AoE is Surf.
Thanks for reading folks

Not really a blooper but here’s a screenshot I came across through my pictures earlier that I’d like to share. 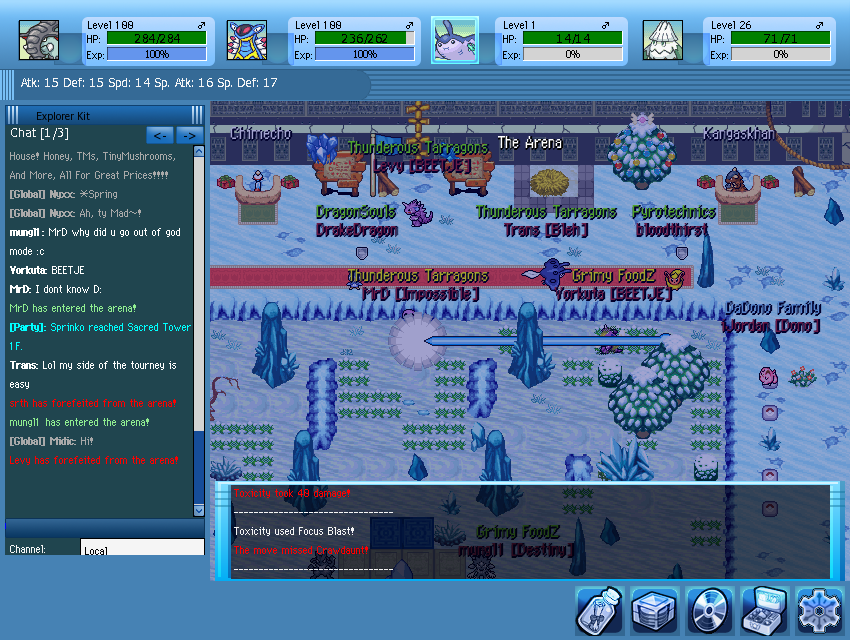 Not counting forms or Heart Slate mons, There’s actually 718 pokemon released in PMU, or 716 if not counting Ditto (since its move/ability dont work) and Phione.

Honestly, I find the [insert absorb ability here] argument to be very weak aswell. When you train a pokemon with one of those abilities, its benefited much more by enemies than allies.
The strategy is using, say, a Volt Absorb pokemon in an Electric type dungeon to easily get all the stat-raises from the surrounding enemies and thus get through the dungeon easier, not the random bonus chance of the player being in a party with someone with a pokemon that has a move that you might be nearby when they use it. Sure, the bonus is nice if you get it, but its not the entire basis around the ability’s coexistence.

On terms of MMOs, I’ve legitimately never seen an MMO where a player’s move hurts their allies. Friendly Fire is a rare thing, because, you know, MMOs are based around multiple players working together and preferably not killing their team since that unnecessarily uses supplies and goes against efficiently beating the dungeon.
thats my two cents poké for now on why FF should be removed. buy gold eat water drink flesh bye

e: actually, if people really want it, devs/coders could just keep the stat-raising effect without the FF effect. That way you can still synergize with teammates if you want and such

Yeah I agree fully with what people said so far.